The European Market for Lighting Fixtures 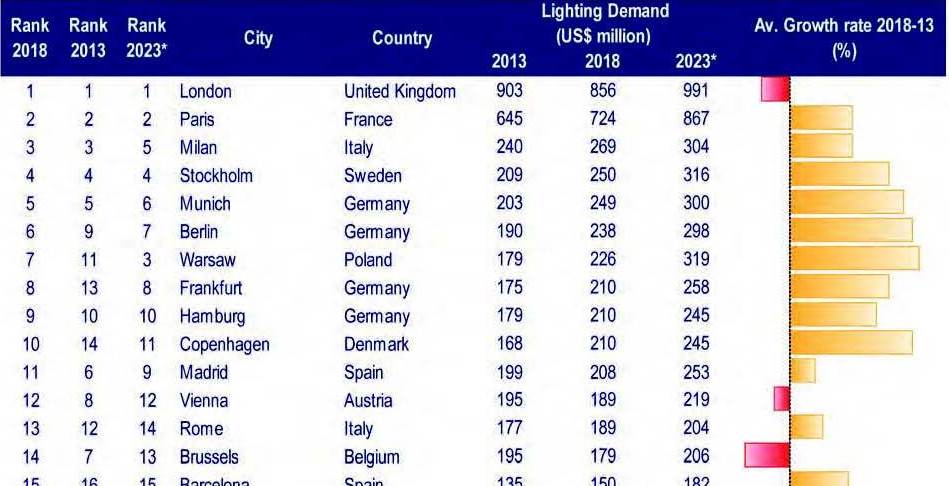 CSIL has now published the 2020 edition of the Report 'The European Market for Lighting Fixtures', one of the flagship researches of its multiclient catalogue. For the first time, the Report covers all 30 EU countries, including both 17 Western European countries (formerly 'Europe Part I') and 13 Central Eastern European countries (formerly 'Europe Part II'). And also for the first time this study also includes an estimate of Lamps and Lighting Controls (in addition to an accurate analysis of the Lighting fixtures market) with a three-year forecast.

According to CSIL estimates, in 2019 consumption of lighting fixtures in Europe recorded a +0.9% increase, thus reaching a value of Eur 18.1 billion. The slight increase results from +2% for professional luminaires and -1% for consumer lighting.

LED lamps recorded a 14% growth (worth Eur 1.9 billion) while Conventional lamps registered a decrease of 17% (worth Eur 450 million).

To be added an estimate of European market for Lighting Controls of about Eur 550 million (+4.8%) to reach the total amount of the Lighting market.

The size of the market

The Coronavirus crisis will likely affect, with different impacts, the single countries and many segments of the Lighting sector. Hospitality and Retail will probably be worse, while quality Home Lighting, Office Lighting and Street Lighting could better face these challenging times. On the whole, CSIL preliminary estimates show that the Lighting market will reach again the levels of 2019 at the end of 2022, to record additional growth in 2023.

The Design segment accounts for roughly 15% of residential-decorative lighting consumption in Europe, to be worth around Eur 1,000 million. Market leaders in the upper-end and design-oriented lighting are: Flos, Artemide, Occhio, Louis Poulsen, Foscarini and Kreon.

Their overall market share is over 50%. Signify (formerly Philips Lighting) is market leader in the office lighting field for most of the European countries, with estimated sales of Eur 220-250 million, ranging from the mid-lower to the upper end of the market.

Lighting sales for Streets and major roads amounts to Eur 1,288 million in 2019. Leading players of this segment include Schréder, Signify, Zumtobel and Eclatec, which hold overall around 40% of the market share, followed by Siteco, AEC (registering a strong growth during the year), Disano, Thorpe, and Swarco.

Lighting demand in a sample of European cities

Starting from 2020, CSIL is monitoring, on a periodical basis, a significant sample of major cities around the world (about 150), selected according their size and growth potential (in term of population and GDP). Among them, 29 are located in European countries.

Overall, in the selected cities from European countries, lighting demand has increased by over 9% between 2013 and 2018. The total value of lighting products demanded by population living in these cities amounted to almost US$ 6 billion in 2018. Interesting enough, there are middleweight cities - such as Dublin, Bucharest, Warsaw and Krakow - which are expected to outperform megacities like London and Paris, by showing a growth rate forecast of over 25% between 2013-2023. Population growth is not expected to be the main driver of furniture consumption in Europe. Indeed, projections show that selected cities from European countries will face an increase of population ranging between 5% and 13% on average, which is however in line with the trend expected for Europe, but significantly lower than growth rates expected for Asian cities.

Overall, the selected European cities performed better than their countries, except for Brussels, Athens, Budapest, Rome, Lisbon, and London. The cities in CSIL sample are predominantly home to middle- income households ($35,000-84,999).