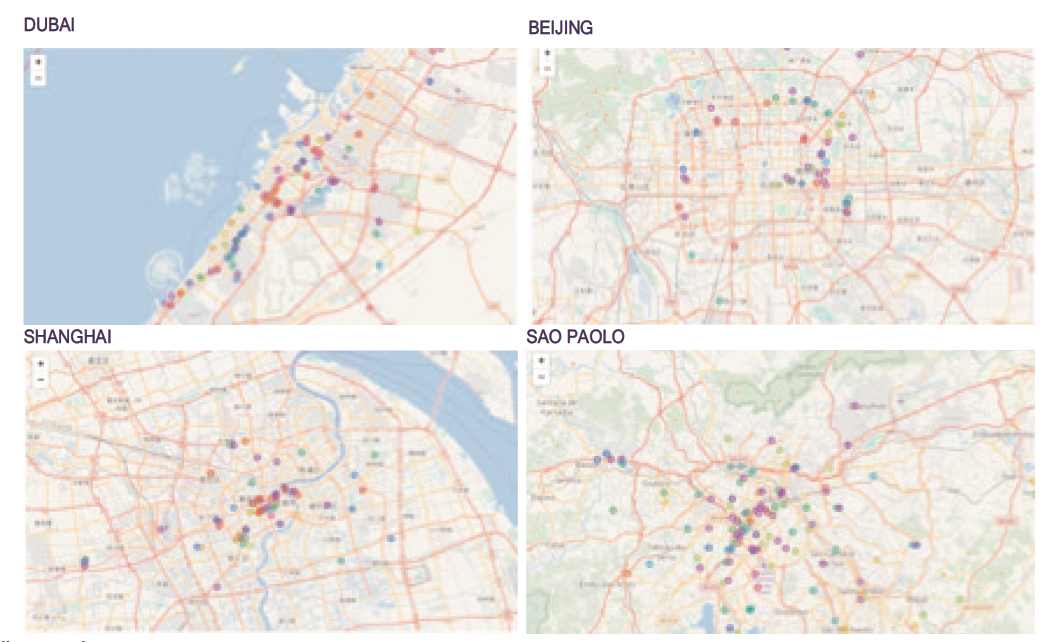 The level of urbanization has been constantly increasing on a global scale and metropolitan areas operate as engines of economic growth. According to UN data, in 2018, 55.3% of the world’s population lived in urban settlements. By 2030, this number is projected to reach 60% and one in every three people will live in cities with at least half a million inhabitants. From being an emerging trend, the key role played by cities in fostering country economic developments and performing as hubs of creativity and innovation has now become a well-recognized reality.

Starting from 2020, CSIL is monitoring a significant sample of major cities around the world (about 150) on a periodical basis. The results will be presented in the new edition of the Report "Smart & Fast Cities". In their relevant parts, these contents will be also available in other CSIL Reports, whose topics range from furniture and appliances to lighting and evaluation projects. In terms of population and income, the 150 cities monitored in CSIL sample are expected to cumulatively account for 14% of the global population and approximately 28% of the world GDP by 2020 (according to preliminary data). Considering the sample composition, Asia (with 53 cities) is the largest geographic area is Asia, followed by Europe and North America (with 25 cities each).

The Report "Smart & Fast Cities" will offer detailed statistics and forecasts. up to 2023 for 150 cities that are likely to be of high interest for the development of mid and high-end exporters in selected sectors (namely furniture and furnishings, kitchen and appliances, as well as lighting). In around 300 pages, the study will offer city highlights (demographic trends, economic indicators), the attractiveness of targeted locations (the sentiment towards design products and "Made in Europe" issue, as well as the ability of cities to foster business activities) from the point of view of both consumers and business communities. A third section of the profile of the selected cities will include a geolocation analysis of luxury stores and iconic new architecture firms.

Different megacities show different characteristics of retail localization choices. For example, in Dubai design outlets are placed along "a line" (namely Sheikh Zayed Road), while in Beijing they look like "circles" (as shown in the maps). Still different is the retail map of Zurich, where stores are spread through the main city streets. In some cases, major architectural works can launch their surrounding area as a new design hub; this is the case of the Burji Khalifa in Dubai. On the other hand, some locations are born spontaneously, like the Design District in Dubai and in Sao Paulo, or the Art District in Miami. New architectural constructions frequently lead to different approaches in term of "quality of life": The master plan made by Gensler for the new financial center of Abu Dhabi in Al Maryah Island is aimed at creating a human-scale environment that would maximize connectivity for workers and visitors while enhancing the opportunity to enjoy a work-life balance. In Moscow, the luxury retail stores still privilege locations in the downtown area (Kutuzovski Avenue, Komsomol'skiy Prospekt, and Bolshoy Savvinskiy Pereulok). At the same time, recent projects are trying to launch new areas outside Moscow, like the Voskresensky district, 25 km South-West of the capital, a compact city designed by Arup to embrace existing mature woodlands and waterways as a public amenity. In Paris, most of the luxury retail locations are within 3 kilometres away from Notre Dame (which CSIL identified as the city centre), while in Sao Paulo a luxury store can be easily located at a distance of 5 kilometres from the city center. Another distinction among different types of localization choice could be made between "impulsive shopping" and "meditated purchases": Zara Home or Swarovski located their stores near the Dom in Milan or the central railway station in Zurich, while the high-end kitchen stores (Boffi, Poggenpohl) are between 3 or 4 kilometres away. In Shanghai, Poliform and Kohler run a flagship store near the Bund, but we should underline, that one location is not enough for most of the leading brands (for which, after 7 kilometres from a hypothetic very center you can easily find a second or a third outlet). The renovation of the "old Xintiandi" area in Shanghai is also attracting luxury brands. In Beijing, you need to move for around 9 kilometres from the center to have spaces for IKEA or Leroy Merlin (in Moscow IKEA is located 20 kilometres from the city centre). Primary design brands need to run at least two flagship stores in the Chinese capital.