The lighting fixtures market in the Middle East and North Africa 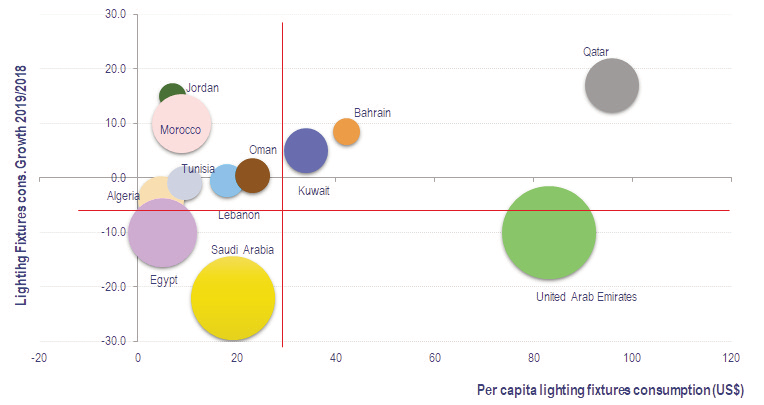 The lighting fixtures market in the Middle East and North Africa (MENA region) is estimated by CSIL to be worth US$ 3.3 billion in 2018, forecasted to reach 3.4-3.5 billion in 2020.

After a stable 2019, new growth is expected for most of the countries in the coming year. The region is a net importer of lighting fixtures (around US$ 2.5 billion, equal to 77% of total consumption). In 2017 and 2018, exports have decreased and, currently, they amount to US$ 344 million. Since 2011, the consumption of lighting fixtures registered a robust increase. However, due to the oil price implications, the market showed a negative performance in 2015 and 2016. Starting from 2017, the annual variation has returned positive. Most of the growth during 2018 comes from Saudi Arabia and Egypt. The lighting market in 2019 is growing especially in North Africa. Sales in the Gulf countries in 2020 are estimated to grow by 3.4% on average. Top 50 brands hold around 50% of the market. As a general rule, most of the upper-end market is managed by European and US brands. Most of them play through local importers or partners. Generally speaking, with plenty of exceptions, the middle-end market is managed by branded Chinese players (Opple among the others), Turkish and local brands. In the low-end, there are unbranded players, mainly from China. LED consumption has grown steeply over the last years. While in 2013 LED lighting incidence on the total was just 16%, in 2018 it was over 50 %. This trend is expected to continue in the next years: actually, LED-based consumption will account for 70% of the total by the end of 2022. The market value of LED lighting at factory prices in the region is around US$1.5-1.6 billion. Among leading companies, Debbas, Ledvance, Zumtobel, Schréder, AW Rostamani Lumina are those with a share of LED-sales above 90%. As an average, lighting controls weight 10% on a lighting project (from a minimum of 2%-5% for a DALI project to a higher share in the outdoor field). The average budget for an indoor project (Wi-Fi, software, and controls) is around 1,000 US$ (for a typical 10,000 US$ lighting project).

Around 15% of outdoor lighting is already connected in the most recent projects in the wealthiest Gulf markets. Contract and projects account for most part of the lighting market. The contract sector is the most important distribution channel for high and medium-upper end lighting products, for both the commercial and the residential segment, due to the fact that affluent Saudis do not buy furniture in retail outlets. Interior designers and architects play a central role as intermediaries between furniture dealers and their customers (construction holding, government, private clients). Key market players under projects are: Philips (now Signify), Osram (Ledvance in the mass market and Siteco for projects), GE (at least in Saudi Arabia), Disano, iGuzzini, NVC, and Opple.