In 2017, the US production of lighting fixtures is estimated by CSIL to be worth USD 13.4 billion. In 2014, it overcame the pre-crisis level and in 2015 and 2016 it continued a positive trend (+5.9% and +8% respectively), mainly driven by the professional segment. During 2017, growth softened to a level of 2.1%, as the production of residential luminaires dropped by almost 20%, while the professional segment kept on hiking at sustained rates (+6.2%). 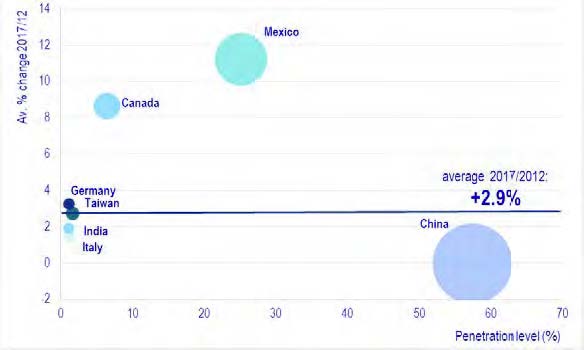 This trend can be explained as a phenomenon of import substitution. Cheap consumer luminaires, mainly from China and Mexico, have been progressively substituting the local production, which now satisfy only 17% of the demand of residential lighting fixtures. On the other hand, local manufacturers have more and more focussed on the professional segment that, in 2017, represented almost 88% of the value of the US production of lighting fixtures. This pattern was further enhanced in 2017, when residential lighting imports increased by 9.4% compared to 2016, while technical lighting flows contracted by 21.2%. Import flows towards the US declined by 5.5% in 2017, continuing the negative trend started in 2016. In 2017, also the export flows kept declining, registering an overall downturn of -2.8% compared to the previous year. Also in this case, the residential segment performed better than the technical ones. Overall, the United States is a net importer of lighting fixtures, with trade deficit of USD 6.9 billion (the largest worldwide). Import flows of lighting fixtures come mainly from China (57% of the market) and Mexico (25%). While Chinese companies have been losing market shares over the last five years (they accounted 66% of the total lighting fixtures import value in 2012), Mexican luminaires are becoming more and more present in the US market (+8% in five years). Canada represents the third trade partner with a 6.5% of the import market (it was 5% in 2012) and a positive trend of growth. Among the top 10 largest importing countries, Mexico and Canada (together with Italy, but at a lower extent) where the only countries, that kept increasing their sales in the US during 2017. The performance of the top 7 importers of lighting fixtures (with import flows higher than USD 10 million in 2017) in the United States is illustrated in the graph. The size of the bubble represents total import value of that country towards the US (the largest the bubble, the largest the total export). China is by far the leading partner, providing a value of over USD 5 billion. During 2017 import flows from China dropped by 8.3%, still the average growth rate between 2012 and 2017 remains stable (0% per year). Mexico and Canada follow. Over the 2012-2017 period, they registered the best performances, growing by an average annual rate of +11.8% and 8.6%, respectively. Germany, Taiwan, India, and Italy have market shares between 1% and 2%. They all registered positive results during the last five years, in line with the market.

The United Sates has the largest market for lighting fixtures worldwide. US consumption of luminaires accounts for approximately 23% of the world value. In 2017 the value of the US domestic market, estimated to be USD 20.3 billion, registered a setback. After years of outstanding growth, in 2016 the lighting fixture market started decelerating and in 2017 it registered a contraction of 0.9%. This slowdown can be explained by several factors. First, the pricing environment has become challenging, as pricing headwinds have eroded company's margins. Then, international trade registered a contraction, as both imports and exports have declined. This is particularly true for the technical lighting business that over the last three years reduced its degree of openness: imports passed from satisfying over 14% of the local market to less than 11%, while exports moved from accounting almost 40% of the local production to less than 25%. In addition, local demand in the USA started softening in the second half of 2016. Such a weakness in internal demand is expected to continue in 2018 and 2019. CSIL estimates a contraction of 1.2% for both years. The market is expected to pick up in 2020 (+1%) and 2021 (+1% each).

Two main challenges can affect the future evolution of the lighting fixtures market in the USA. First, the protectionist trade measures undertaken by the Trump administration could accelerate the decline of the US trade of lighting fixtures in the short run and, in the middle run, they might trigger a trade tariff war, especially with China, that could further worsen the trade environment. The second challenge is endogenous of the lighting market. As the LED momentum has been gradually fading, the industry needs a new disrupting technology that will drive the growth in the future. Actually, the LED market is still growing at sustained rates driven by energy savings and better light quality. However, the wide variety of global competitors in LED lighting, the long replacement cycle once installed, and the declining margins dampened by pricing headwinds have been making the LED business less profitable than a few years ago. For this reason, the industry has now identified in the intelligent networked lighting, building management systems, and the IoT the next propelling force that will guide the market in the next future. So far, these types of innovations are playing a role mostly in the supply side, with huge investments by all relevant players. On the demand side, connected lighting systems only account for few percentage points of the total consumption of lighting fixtures.

The CSIL Report 'The Lighting Fixtures Market in the United States', XII edition, year 2018 is available for online purchase and download at: www.lighting.csilmilano.com